Dr. Melynie Campbell graduated with her Doctor of Arts degree in Music Education with a minor in Educational Psychology in May 2019. She is also a classically 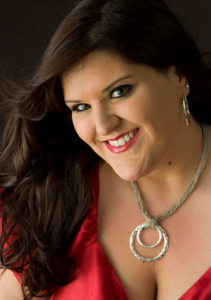 trained Opera singer hailing from Thornton, CO and has toured professionally internationally in Italy, Spain (Catalonia), France, and Germany. During her time in Germany and France, she worked with a professional company, Opera Classica Europa, performing in a rotation of four different productions across Europe, even performing for the Mayor of Versailles. In 2014, she toured in Italy and performed in numerous cathedrals and venues in and around Rome including singing at the Vatican at St. Peter’s Basilica singing during the 5:00 p.m. Mass on St. Patrick’s Day during the Festival of Peace and Brotherhood. Most recently in 2018, she toured in Barcelona and Paris, performing in sacred spaces such as La Sagrada Família in Barcelona and for Sunday Mass at the Notre Dame Cathedral in Paris.

Dr. Campbell has been invited to sing in Austria, China, Rome, Paris, and at the Beverly Hills International Music Festival. She’s performed with The University of Denver, The University of Northern Colorado, Opera Ft. Collins, and Flatirons Opera Theatre, competed in the Metropolitan Opera Council Auditions, and has appeared as a guest operatic vocalist for churches, festivals, galas, and sporting events throughout the Denver metro area.