In addition to teaching in the public schools, Larisa works for the Boulder Chorale as the Assistant Artistic Director for the Boulder Chorale adult choruses, the Co-Artistic Director for the Boulder Children’s Chorale, and director of the Piccolini and Prima Voce children’s choruses, grades K-4. She also maintains a private voice, flute, and piano studio. Additionally, she has partnered with the Colorado Springs Children’s Chorale through their Adopt-a-School program, played flute in the Rocky Mountain Wind Symphony in Colorado Springs, and continues to freelance as a flutist and vocalist along the Front Range. She was a founding member of the Colorado Elementary All-State Choir Board and served from 2016-2020 on the Colorado Middle All State Choir Board. Nathan Wubbena received his Bachelor of Music Education from the University of Northern Colorado in 2011, and his Master of Music in Music Education with a Conducting Specialization at Colorado State University in 2018. Nathan has taught students from elementary to high school to adults, on both the Front Range and Western Slope, in curricular and private settings. He has had extensive experience teaching choral, musical theater, and contemporary a cappella genres, and is an accomplished performer in each.

In 2015, he received the Outstanding Young Music Educator Award from the Colorado Music Educators Association, which honors outstanding achievement in an educator with up to 5 years of experience. His experience and recognition have since resulted in him being requested as guest clinician throughout the state of Colorado. He is Chair Emeritus of the Colorado Middle All State Choir board, of which he was a founding board member. Additionally, he is the President of a different music non-profit, Ascent Vocals, of which he is the founder. Nathan resides in Longmont with his wife, Anna, his son, James, and daughter, Claire. He enjoys cheering for the Broncos and spending time outdoors with his family and two dogs. 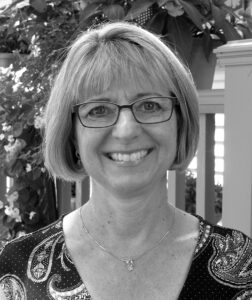 Kim Dunninger holds a Bachelor of Music Education with distinction from the University of Maine and a Master of Music in Choral Conducting from the University of Oregon where she conducted the Women’s Choir. Kim is an accomplished singer and teacher having taught choral and orchestral music, K thru college, in NH, OR, ND and CO. She recently retired from the Adams 12 5 Star School district. During her tenure there, her ensembles were chosen to perform at the CMEA clinic/conference and performed in Carnegie Hall twice.

Kim has sung in many choirs including the Santa Fe Desert Chorale, the Robert Shaw Carnegie Hall choral workshops, The Durango Women’s Choir and Durango Choral Society, and the Varna Music Festival in Europe. As a soprano soloist she has performed with the Durango Bach Festival, the San Juan Symphony, Music in the Mountains & Animas Music Festivals and the Colorado Recorder Ensemble. Locally Kim has sung in St. Martin Chamber Choir, the Boulder Bach Festival chorus, Summer Choralfest and Seicento Baroque Ensemble and currently sings in Kantorei.

Kim is an active member of ACDA, Boulder Area Delta Zeta Alumnae and the Indian Peaks Chapter of DAR where she is music chairperson. Her choral arrangement, “America Still Beautiful”, won 3rd place in the 2016 National NSDAR American Heritage contest. Kim lives in Erie with her husband, Mike, and has two children and two step sons. She enjoys skiing, gardening, musical theatre and, of course, singing!